No read, just a running play.

This is just a straight up running play (though you could incorporate routes and turn into a passing play). I would limit this play to 8 and under. Though I’ve seen older teams run this successfully as well. It depends on the speed your team can run it through to the third option. 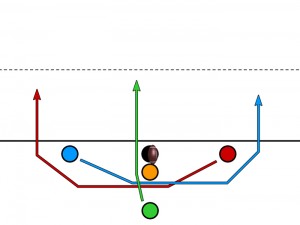 The first option is giving the ball to the Running Back on the dive. This simple handoff can be surprisingly effective at younger ages (8 and under). Many teams have running plays end up toward one of the sidelines. Because of this, coaches may set up their defenses to defend the sidelines opening up the middle. I would not start off the game by running up the middle, but if it’s open I wouldn’t wait too long to exploit this either.

If the QB fakes this initial handoff, the next option is one the Slot receivers running behind the QB for a hand off. It may make sense in the beginning to have the Slot Receiver on the side the Running Back went to be the second option. This is because it allows the QB for have a fluid motion of opening up a little for the first option, then opening a little more for the second. (Just something to think about as kids start to learn the QB position).

The final option is giving the ball the other receiver again running behind the QB.

One difficulty with this play is the time required to get to the third option. If the defense rushes, you will not have time. Also, the timing with the receivers will cause some issues in the beginning as the third option will start too soon and run into the other receiver.

As eluded to earlier, you could turn this into a passing play and have everyone run a route after the fakes. However, with the time it takes to get through the fakes, there will be little remaining to throw the ball. You could give the ball to final option who would throw instead of running since handing off will kill the QB time clock.

Also, you can just mix up the order as well, such as Blue, Green, Red.