The quarterback’s first read is the inside Slot receiver on the deep post route. The receiver can run a couple different routes depending on the defense. If the defense in is a single safety set, then have the receiver flatten out the post route toward the opposite sideline (below, left). The receiver should run in front of the safety so the quarterback has a nice area to throw to with minimal margin of error. 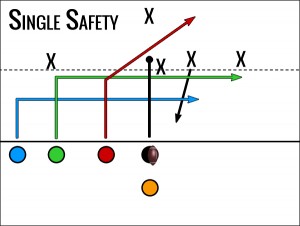 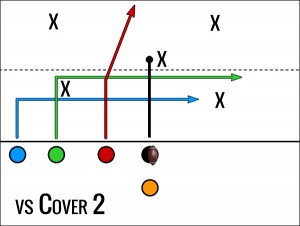 If the defense playing a cover 2 (2 safeties, above right), then the receiver should run a true post route, getting vertical down the field. The goal here is to catch the safeties napping. Against many teams, the deep middle is frequently open as teams try to push the offense short and to the sidelines, however, quarterbacks miss the throw because it’s usually congested in the short middle.

The next read is the outside slot receiver (Green) coming across the field on the drag route. The Quarterback should try to hit this receiver once he has passed the center. If Green is covered, the next option is the Blue receiver on the second drag. It may be hard to get the timing right, but the ideal situation is having this receiver catch the ball before getting to the middle of the field and then immediately turning up. If the quick hit is not open, the quarterback should continue with the receiver to the opposite side.

If Blue is not open, the outlet is the center (Black). The center should try to find an open in the middle of the field, so the throw may be a few yards off center depending on how the defense is playing this area.

Depending on the speed of the two drag receivers, you may have two kids coming across the field even with each other. Keep this in mind when calling this play. If you have a much faster kid playing the Wide receiver spot, have him stop for a one count before coming across the field. You can also move the slot receivers closer to the center.

Play Variation: One variation is changing Red’s route depending on the defense as mentioned above. Another variation is just moving the receivers around in order to get the timing you want.

Check out this other trips flag football play where the drag routes go in opposite directions.