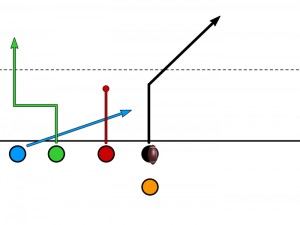 The quarterback is looking for the wide receiver on the quick slant coming underneath the two slot receivers who are running a wheel route and 6 yard hook. If the quick slant is covered, the next look is the center on the corner route.

After that, the quarterback should look deep on the other side for the slot receiver running a wheel route up the sideline, the inside slot receiver running the hook is the outlet on the play. This receiver should slide left or right to find an open area of the field. If defense is playing man, once the quarterback gets to the end of the progression, the Slot Hook Receiver will need to move to get open.

Play Variation: You can flip the routes of the slot receivers and have the inside receiver run the wheel route. However, the main goal of this play is get the ball into the hands of one your play makers on the quick slant. Having too much action by the other receivers may clog up the area as the inside slot runs underneath the outside slot.

Additional Trips Play: Check out this other trips play. It’s mainly a short yardage grind play, but has two options for the deep throws should the defense go to sleep.