The video below details a youth flag football drill I run with my kids almost every practice. This flag pulling drill usually only takes about 5 minutes. Depending on the number of players in each line, the kids will each get around 8-15 chances on defense. While scrimmaging will teach your kids where to be in certain situations based on the play the offensive runs, many games are lost because of poor flag pulling, despite being in the perfect position on defense. This is why repetition of the basic skills is necessary to instill good technique and confidence in your players.

If you prefer to only see the drill in action, skip ahead to about 38 seconds into the video.

Some key points are:

The basic setup of the drill is creating a rectangle with four cones. Have the long end be about 10-15 yards and the width about 7 yards. From the center of the rectangle walk out about 7 yards in each direction and place down a cone. This is where the defense will start the drill. 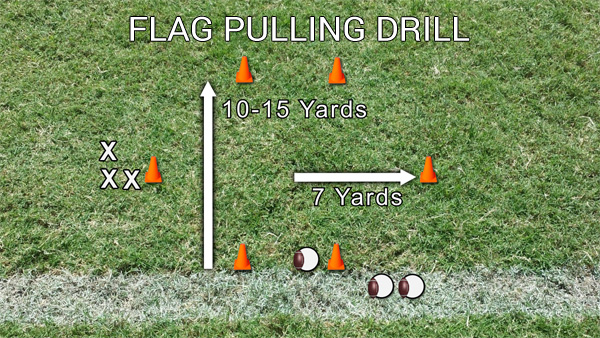 This can be effective for the offense as well. Have the offense run full speed ahead instead of slowing down and trying to juke the defender. This drill simulates situations where the offense has beaten the initial defender, is racing down the field (usually up the sideline), and secondary defenders must make the flag pull.

Add a little competition to the drill by dividing your players into two teams. Have one team stay on defense and keep track of the number of flag pulls. After a couple rotations, have the teams switch. The team with the most flag pulls wins.

One tip for flag pulling drills is to try to always have the offensive players carry a football. This gets them used to carrying a football while trying to beat the defense. Also, kids without a football tend to flag guard more as they get around the defense. This is not a good habit for the offense.

Adding this flag football drill to your daily routine should payoff as your team will progressively get better throughout the season and limit the number of missed flags resulting in big plays for your opponent. Spending at least 20 minutes per practice on the basics of flag pulling will help your defense overall. This is just one flag pulling drill that can be used. Another flag pulling drill that is a team favorite is The Gauntlet.