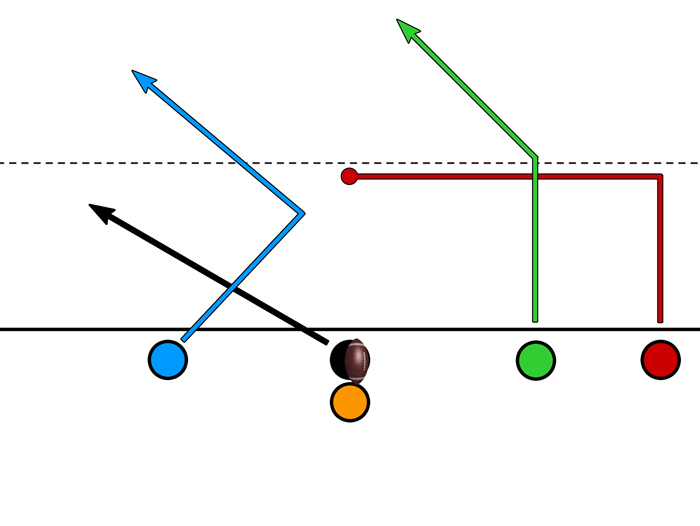 With elements of short and long routes, this play can be used in various situations. For a short gain, the Single Slot receiver will usually be open as many defenses leave the short middle of the field uncovered. If the Slant is covered, to provide better passing angles, have the QB roll out to the Single side about half way to the sideline. If you have your QB roll left, it may give the play some additional time to develop as most teams blitz from the offense’s right side.

If the defender from that side chases the Slot receiver, the Center coming underneath is a good option for some short yards. However, don’t count on the Center being wide open too often. If he does make the catch and the defender on that side stayed in his zone, the yardage gained is minimal unless the Center can make an individual play.

The deep action occurs when the Twins Slot receiver runs the Post and the Single Slot changes his route into a Corner. If facing a single safety defense, the safety will have to pick a receiver to cover leaving the other open. The key is that the Single Slot receiver get away from the middle of the field as quickly as possible so that the safety cannot just play a zone and cover both. Also, the QB needs to be able to throw the deep ball fairly flat (no moon balls). Throwing the ball high will allow the safety time to come off one man and get to the other.

If facing a two safety defense, both the options above should be covered. However, this will leave the deep middle wide open for the Twins Wide receiver. Once the receiver enters this area, he should find an open space and just wait.

One adjustment would be to move the Single Slot inside closer to the Center. Instead of a Slant-Corner route, have him just run the Corner.